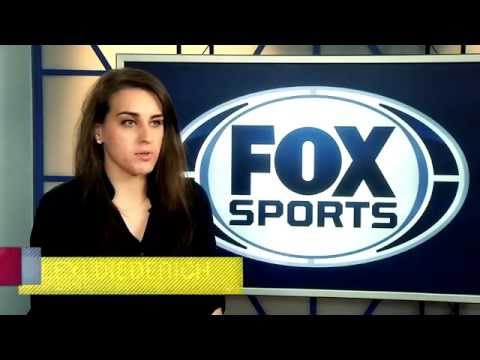 In the fall of 2014, UMN students had the opportunity to work on a branding campaign for FOX Sports North's broadcast talent. The winning team go to present their ideas to FOX Sports North executives and on-air talent. Lexi Diederich was born and raised in Madison, Wisconsin. During her time at the University of Minnesota, she was determined to pave the way for a career combining her life’s passions: writing and sports. She did just that, and graduated with a bachelor’s degree in Professional Strategic Communication and Sport Management in December 2014. Lexi has enjoyed numerous jobs, such as those at the University of Minnesota’s News Service and Athletic Communications office, but especially loves snowmobiling with her family during her free time.

“The real-world experience gained from the Fox Sports University program is truly invaluable. As someone who wants to a career in the sports media industry, this program was everything I could have asked for and more.”

“Knowing that my group’s campaign could be brought to life by Fox Sports North gave me the motivation to put everything into this project, and seeing my group’s hard work pay off was extremely rewarding.”

“It was an honor to work with people I admire at Fox Sports every step of the way during the semester. Their genuine support and advice was definitely appreciated, and it’s exciting to know that I have such great professional connections for life.”

Mac Mischke is a 22 year old writer from St. Paul, MN. He will graduate from the University of Minnesota in May of 2015 with a degree in Creative Advertising. Last summer, he was one of 13 students invited to the Marquette Global Brand Tracking program in London and Prague, where he trained at some of the world’s top international advertising agencies. Mac considers this to be the most career-shaping event of his young life. Mac is wildly curious about the insights that guide great ad campaigns, and his bookshelf is filled with books about that very subject. He is applying to copy writing jobs at advertising agencies in Minneapolis, Milwaukee, and Chicago, as he has always believed that excellent writing will be his contribution to the world.

“As a student, I’ve always craved those experiences that most resemble real-world environments. Meeting with my group to work on the campaign for  Fox Sports provided that.”

“Writing and thinking creatively for Fox Sports didn’t feel like an assignment, it felt like a privilege.”

“Its always hard to know whether you’ve chosen the right career path while you’re in school, but this project with Fox Sports allowed me to test the waters of my future career.”

Originally from Roseville, Minnesota, Becca attended Roseville Area High School, where she was a three sport all-state athlete.  She now attends the University of Minnesota pursuing her lifelong dream of competing in the Big Ten conference.  Becca runs both track and cross country for the Minnesota Gophers and has been a part of several Big Ten and NCAA championship teams.  Inside the classroom, Becca is pursuing a degree in strategic communications through the Murphy School of Journalism with a minor in sociology.  She is also part of the University of Minnesota’s distinguished honors program.  Becca plans to graduate in May 2015 and will pursue a career in corporate communications.

“Working with Fox Sports North was both an honor and an incredibly rewarding experience that I know will help all of my classmates in our future endeavors.”

“The Fox Sports North assignment will remain a highlight of my collegiate career because it gave me the opportunity to collaborate and compete for the business of a prestigious client.”

David is a normal guy from St. Paul, Minnesota and despite the cold, loves the Twin Cities. A die hard Twins/Vikings/Timberwolves/Wild fan, David is more than capable  of dealing with disappointment. David is a recent grad from the School of Journalism at the University of Minnesota with a degree in Strategic Communications. Graduation plans are chaotic and varying, from teaching abroad to working at an ad agency, but his overarching goal is to work hard and create a defining path for myself. One thing he feels that college teaches you most revolves around priorities and the ability to get them in order. It is hard to tell what the future will hold, but he definitely highly values his education from “The U”, largely thanks to projects like this FSN campaign.

“The chance to take an entire semester and develop an actual campaign for an actual business was unparalleled, and it was absolutely one of the best undergraduate experiences I had.”

“Working in a group and seeing all your research become an insight, which in turn becomes idea, which then becomes a campaign, was unbelievable.”

“The FSN team did such a great job creating this “real-world” brief that I felt my team (Motion 360) working like an actual agency, and going to class was more like going to a job you love.”

In the fall of 2014, FOX Sports U students at the University of Minnesota worked on developing a branding and awareness campaign for FOX Sports North’s broadcast talent for the Twins, Wild, and Timberwolves.

Steve brings more than 35 years of professional strategic communications experience to the faculty, including the last six as CEO of advertising agency Campbell Mithun. Starting in public relations, he shifted to copywriting, but then spent nearly 30 years in account, strategic and agency leadership positions. As head of strategic planning and integration, Steve created many of Campbell Mithun’s suite of strategic planning tools, many of which he uses today to teach Generation and Selection of Communications Strategies in the Professional M.A. Program. His efforts won a Jay Chiat Silver Award for Account Planning in 2008.

Steve brings more than 35 years of professional strategic communications experience to the faculty, including the last six as CEO of advertising agency Campbell Mithun. Starting in public relations, he shifted to copywriting, but then spent nearly 30 years in account, strategic and agency leadership positions. As head of strategic planning and integration, Steve created many of Campbell Mithun’s suite of strategic planning tools, many of which he uses today to teach Generation and Selection of Communications Strategies in the Professional M.A. Program. His efforts won a Jay Chiat Silver Award for Account Planning in 2008.

Bring Fox to My School